July has seen many sunny summer days this year and the residents of Laurelin have made the most of it. From the riddles in the Shire, to the tournaments in Bree, to feasts in Lorien and to faires in the lands of Rohan, as well as many other interesting happenings in day to day life, Middle Earth certainly has been busy!

Over the past month, there have been some great events that the people of Laurelin have taken part in:

The elves of Lothlorien gathered for a Feast of Summer Wine and Song. There was much merriment, music, dancing and even a proposal! 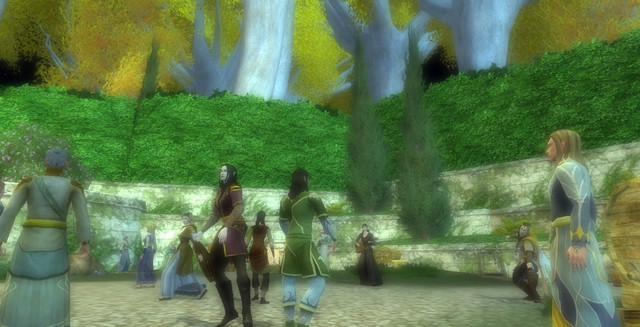 In Bree-land, Fiontann, leader of The Black Steel, held the 1st Fist of Steel Tournament, a bare-knuckle fighting contest. Congratulations to Zarbes of Gondor for winning!

The Hobbits of the Shire took part in a Riddle Fun Run, hosted by Miss Pycella. There was certainly a lot of fun and silliness!

The people of Rohan gathered for The Fréasburg Faire for the first time, merchants gathering to sell their wares and musicians and storytellers take to the stage to entertain.

All throughout the month, weekly, there has been several reoccurring events:

On Mondays, Dwarves gather at Thorin’s Gate for drinks, music and more fun at Dwarves’ Night Out!

On Tuesdays, the servants and common-folk of Edoras gather down at the fords just outside of the city for Wash Day, where they do the weeks washing and discuss matters as they do so.

On Wednesdays, the elves of Rivendell gather in the Hall of Fire, to drink wine and catch up with each other.

On Thursdays, the Orb and Sword tavern in Belfalas in Gondor holds a free drink evening to try to bring people together.

On Fridays, the hobbits of the Shire gather in the Green Dragon to share tales amongst each other. Also, the men of Edoras gather in the Mead Hall to drink and feast and be merry.

Stories and Other Writings

Here is a collection of adventures submitted throughout July:

Iofan, the Stoor Hobbit, has a close run in with some Dunlendings!

Cesistya sent a long letter to Brynleigh, catching up on their lives.

Bilda wrote a rather charming letter to Maddoct.

Fiontann found his old journal and decided to write down what happened over the past few weeks, focusing on how he helped the teenage girl Catherynne.

Miss Jackilyn continued to write in her diary, despite preferring to draw in it instead.

Rickstan contemplated the past coming back to haunt him, seeking the advice of his father-figure.

Maddoct begins writing his first log for the Blackbird Soothery.

Here is a selection of artworks and screenshots submitted this month:

Welcome those who have joined the Laurelin Archives in the past month:

I would just like to make note of the new locations avaliable on the noticeboard: Edoras and Minas Tirith. We hope that this will be useful for those of you based in Rohan or Gondor. We are also looking for suggestions for other noticeboard locations, so if you have an idea, send me a message please.