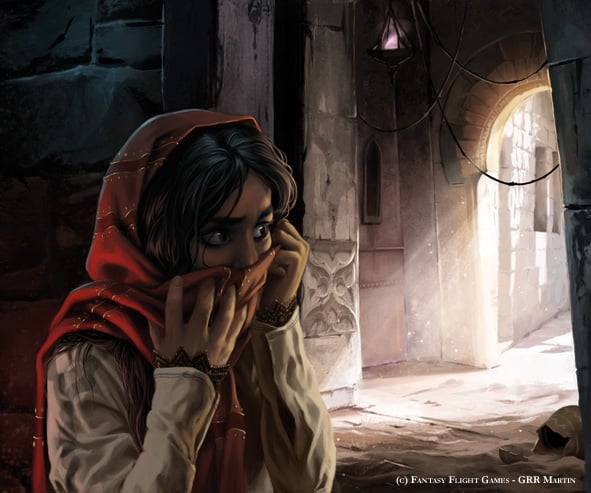 Lumina was born in Near Harad, between Khand and Umbar and north of Haradwaith. She is the second youngest of six siblings. From a young age, she was very curious about the world and everything in it, and she has always wanted to learn everything she could. Even as a little girl, she begged for work to be able to afford lessons, and was often helping in kitchens and taking care of the sick or wounded in exchange for reading and writing lessons, from anywhere she could find. She was eventually taken under the wing of an elderly Haradrim scholar, where she learned how to read and write fluently.

She was very close with all of her siblings, and so when her older brother bid them farewell and left Near Harad, Lumina was devastated. She remained very upset for quite some time, and as she began to grow older and Mordor marched into Harad, Lumina fled her home. She tried to return and find her mother and her siblings, but she didn't know where they had gone and did not know how to find them. And so she traveled North, through Harandor and into Northern Gondor. It was not long after until she found herself in the Great White City, where Lumina was distrusted and insulted and treated quite poorly. She was taken under the wing of an elderly and poor but respected Innkeeper and given a room if she cooked and cleaned for the patrons.

Nonetheless, with the help of the Innkeeper who had become like a mother to Lumina, she was able to begin working with the other healers in the Healing Houses, and under their leadership, she grew to become a very good healer. After time, she was also allowed to join the Scholars in the Scholar's Hall, where she perfected her Westron and learned how to read and write it. She became fascinated with learning languages, picking up bits and pieces where she could and learning phrases and terms in Sindarin and other languages, though she did not stay long enough to become fluent.

Lumina caught the attention of a minor Gondorian Lord she treated in the Houses of Healing when she was only sixteen years old. His affection for her grew, and he constantly rained upon her expensive gifts and paid for her to stay in a nicer tavern than she one she had been staying in. They married, despite Lumina's low status and his family's objections.

But as time grew on, his family grew more resentful of Lumina, and they threatened to rid him of her if he did not abandon her. He left her with a hefty parting gift and a lengthy love letter, and his family continued to threaten her until Lumina finally left the city, deciding that she would instead search for her brother. Feeling disgraced, Lumina never told anyone she had been married. Her brother had long been gone before her, but she was able to pick up stories of him here and there.

She followed his trail as best she could, often pressing people for information. Eventually, Lumina would find herself in Bree, where her brother was last heard of. She met a friend of his, who gave her a key to her brother's vault, in which he had stored several things for Lumina for whenever she found her way to Bree. She later discovered his grave and mourned him all over again. Lumina bought a small house in the homesteads and began making coin as a Healer, though there wasn't much need for an income.

It wasn't too much later when Lumina met Leoffrith, and the two were married in the Bree festival grounds with all of their friends present.