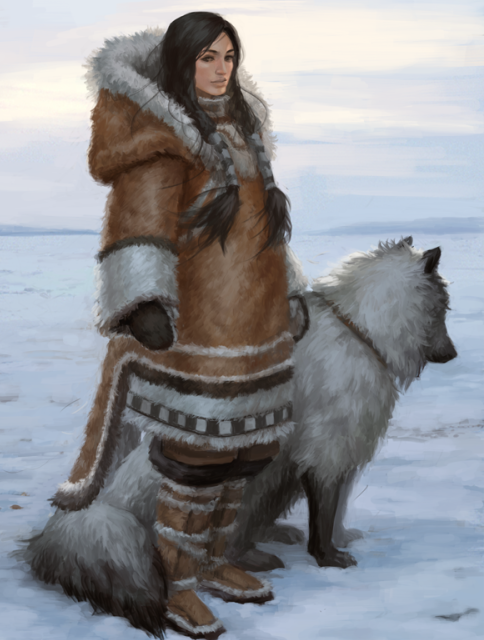 Sofie was born in Kauppa-kohta, the trade point of Forochel. She only spent the first few years of her life with her parents, both merchants, until she was sent to Sûri-kylä to live with her grandmother. Sofie heavily resented this decision, she was only about five or six years old, and was absolutely convinced that they did not want her. She grew up in Sûri-kylä but was always kept very close at hand, she was never allowed to leave the village or stray away from her grandmother. She spent all of these years learning healing at her grandmother's hip, and preparing to become an Oracle.

Unlike her parents and unlike other Lossoths that Sofie grew up with, she loved whenever travelers came through. She loved to talk to them and hear their stories, and she loved befriending them. Perhaps it was because she had been confined for all of her life, but Sofie loved hearing the tall tales of adventures and she adored learning anything she could about the outside world. She took her writing lessons very seriously, hoping to read anything she could get her hands on.

Her grandmother sent her out into the world the day she turned eighteen. She started traveling, she explored every inch of Forochel and she went down to Kauppa-kohta to see her parents. The interaction with them was quite cold, as Sofie had never truly forgiven them for sending her to her grandmother, even if she understood why. She continued traveling, going down into Evendim but not going any further, though she was very interested in the Shire.

A little over a year later, Sofie returned to her grandmother. She finally began to learn about being the Oracle, now more enlightened than she had been when she left. Her grandmother taught her everything she knew, before she stepped back from being the tribe's Oracle, and settled down in Kauppa-kohta with Sofie's parents. Sofie, from then on, was regarded highly and spent most of her time alone. She kept to herself, studying dreams and shapes in fire and embers.

Sofie now mostly spends time with people when they come and make an offering for good luck. Having learned Westron in her travels, she spends a good deal of time reading and translating Westron books into her native language for others in Sûri-kylä to read. Sofie does continue to travel to the other villages when she has the time to do so, and still enjoys greeting all new travelers.