And so it was that in the year of the Council of Elrond, there lived in Mithlond upon the shores of the Gulf of Lhûn in the lush green realm of Lindon, a young Sinda student of Edhel wisdom named Angollon son of Ioriston the Learned, who aspired to be not only a scholar and loremaster as his father before him, but also a gollor as foreseen by his mother, Ýridhremes the Wise, in the hour of his birth.

Now after the Dagor Bragollach, the fourth battle of the Wars of Beleriand against the evil forces of Morgoth Bauglir, many Sindar fled to the Hidden Realm of Doriath and the protection of the Girdle of Melian, and the parents of Angollon were among them. For it was while they were yet young and both under the tutelage of Melian the Maia within the great and beautiful mansions of Menegroth, that they fell in love and became betrothed and were later married. In the year 486 of the First Age they begot their firstborn and named him Aglaron upon his birth, and great was their love for their son.

Then after nigh fifty years had passed since the Dagor Bragollach, Eru Thingol, King of Doriath, was grievously slain for that Silmaril which was Beren Erchamion's bride-price for Lúthien Tinúviel's hand in marriage, and Melian withdrew forever from Middle-earth. Ioriston and Ýridhremes together with their son survived the sacking of Menegroth by the Gonnhirrim of Nogrod, and yet dwelt there after Dior Eluchíl son of Beren took up the crown with Nimloth his Queen.

But alas, it came to pass that during that city's ruin by the Sons of Fëanor in the Second Kinslaying, Aglaron (a mere child of sixteen summers) was grievously slain, and Ioriston and Ýridhremes fled with Elwing the White daughter of Nimloth and the remnant of the Iathrim to the Havens of Sirion, and there merged with survivors of the Fall of Gondolin. In the darkest hour of their anguish for the loss of their young son, they swore an oath before the Valië Varda Elentári to bear no other children until the threat of the Noldor was no more. However, again the Doom of the Noldor was visited upon them, and the Havens too were destroyed by the Sons of Fëanor again seeking the Silmaril of the Nauglamír, and those few who escaped this gruesome Third Kinslaying removed to the Isle of Balar in the ships of Círdan, Lord of the Falathrim, and Gil-galad son of Fingolfin.

There they took refuge until the War of Wrath, and after the deluge of Beleriand they followed Gil-galad to the remains of Ossiriand where he founded the last Noldor high kingdom in Mortal Lands; this was Lindon, and there he was acknowledged as High King of the Elves of the West in the First Year of the Second Age. Ioriston and Ýridhremes dwelt in Harlindon where Celeborn, kinsman of Thingol and prince of Doriath, was lord and there remained even while those Sindar who had no love for the Noldorin Exiles passed eastward.

But after nigh three and a half thousand years, Gil-galad was grievously slain on the slopes of Orodruin in the War of the Last Alliance, and the lordship of all Lindon passed to Círdan the Shipwright. Many were the Noldor that departed for Valinor at that time, and many more were the Edhil that came after to the Grey Havens to take the white ships of Círdan into the Uttermost West. At this time Ioriston and Ýridhremes took abode in Mithlond under their Sindar lord, and there Ioriston tended the library of Eldar lore assembled in that city by Elrond Peredhel, while Ýridhremes laboured as a healer.

Now with the doom of the Silmarils removed and their oath fulfilled, and the defeat of Sauron bringing about a time of peace, they thought to have another child, and thus begat a second son in the year 2967 of the Third Age. Ioriston named him 'Ioristion' at his Essecarmë, but Ýridhremes gave him the amilesse apacenyë 'Angollon', for in a vision in the hour of his birth she saw her son in a place of darkest shadow, and it seemed that he was illumed from within by a great white light. And she knew this to be his fëa luminous with the Flame Imperishable of Eru Ilúvatar, and thus she perceived that he would one day be not only a scholar of angol (that elven art which the Edain call 'magic'), but also a practitioner thereof: a gollor. What cilmessë Angollon chose at his Essecilmë when he was deemed ready and capable of lámatyávë in his tenth year is private, and he uses his amilessë in public.

And it came to pass that from his earliest years Angollon did indeed inherit his father's scholarly passion for knowledge, and showed great skill in Deep Lore. However, his endeavours made for a lonely childhood, for although he was fond of the other Edhel children of Mithlond (few in number as they were in that Haven's diminished populace), he oft-times eschewed their company for solitude amongst the scrolls and books for which his father cared. And so they gave him the epessë 'Parvion', which means 'son of book', and was thus a mischievous play on his name as 'angol' can signify either 'deep lore' or 'stench' in the Sindarin tongue, and indeed, he often smelled more of the library than the woods. Nonetheless, he had a deep empathy with the natural forces of Arda and compassion for all kelvar and olvar of Middle-earth, and great was his love for the starlit forests of Lindon.

Now when Angollon came of age in his fiftieth year, Ioriston was grievously slain when his company was waylaid by Yrch whilst returning from a journey to Imladris, and Ýridhremes, in her despair, sailed for the Undying Lands soon after. With this loss of both his mother and father, Angollon's love of Mithlond was diminished, and he much desired to depart its refuge. But Eldar law permits no hên to undertake either warfare nor exploration (and hîn are not considered full-grown until a hundred idhrinn have passed); nor would his parents have willingly let him go forth, so young and unready, to wander alone and lost in a world corrupted by evil. However, beset by grief and yet with the fervent flame of youthful curiosity alight within his breast, he made the naive decision to disregard both this decree and the unspoken will of his parents, and chose to abandon the haven of Mithlond. 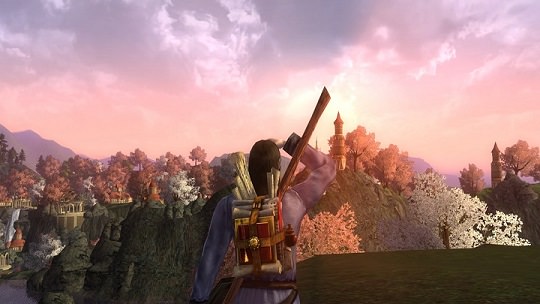 And so it was that in the last days of Iavas in the year 3018 of the Third Age, Angollon set out one morning at dawn to follow the Great East Road into Eriador on his unending quest for knowledge...

"Nor were the 'loremasters' a separate guild of gentle scribes, soon burned by the Orcs of Angband upon piles of books. They were mostly even as Fëanor, the greatest, kings, princes and warriors, such as the valiant captains of Gondolin, or Finrod of Nargothrond and Arothir his kinsman and steward."

- J.R.R. Tolkien, The Shibboleth of Fëanor