Istari Nalmë is a Quenya phrase which means "we are scholars":
ista = knowledge / istari* = ones who know | nalmë = we are

Numerous are the scholars of lore throughout Eriador, and it was deemed amongst the wise that during these dark days as the Shadow of the East reaches ever farther across the land, an informal cooperative faithful to Arda Envinyanta should be established whereby each scholar might collaborate with others, and in doing so share both knowledge and resources between them and thus further the aid they provide to the Free Peoples of Middle-earth whom they serve.

And so it came to pass that Istari Nalmë was founded in the Third Age by the Edhil scholars of Mithlond who laboured in the Great Library of lore that was there begun by Elrond Peredhel during the First Age when, following the War of Wrath, he remained in Lindon with Ereinion Gil-galad and thereafter gained great renown as a healer and loremaster and a master of wisdom.

And when in the Second Age Elrond led Edhil from Lindon in battle to defend Eregion against the forces of Sauron, he bequeathed his library to Pengolodh of the Lambengolmor that was founded by Fëanor. He was counted as the greatest Loremaster since Fëanor and Rúmil, and dwelled for a time in Lindon after the destruction of the Havens of Sirion and the deluge of  Beleriand. And when after the fall of Eregion Pengolodh left Ennor for Tol Eressëa, the residing scholars became the caretakers of the library.

And in time they enlisted those scholars of Duillond and Celondim into Istari Nalmë, then the Hadhodrim of Gondamon and Thorin's Halls; and the folk of the Bree Scholar's Stair Archives and the Mathom-house of Michel Delving; and the Edhil of Imladris, and many others besides.

* (Not to be confused with the Heren Istarion, or "Order of Wizards".)

Disclaimer: The 'Great Library of Pengolodh in Mithlond' is my own invention, and therefore does not exist in J.R.R. Tolkien's Legendarium nor in the world of LotRO.

The phrase Istari Nalmë is in the Quenya tongue, for although Eru Thingol forbade its use in his realm when he learned of the kinslaying of the Teleri at Alqualondë:

"But hear my words! Never again in my ears shall be heard the tongue of those who slew my kin in Alqualondë.! Nor in all my realm shall it be openly spoken, while my power endures. All the Sindar shall hear my command that they shall neither speak with the tongue of the Noldor nor answer to it. And all such as use it shall be held slayers of kin and betrayers of kin unrepentant."

[...]
And it came to pass even as Thingol had spoke; for the Sindar heard his word, and thereafter throughout Beleriand they refused the tongue of the Noldor, and shunned those that spoke it aloud; but the exiles took the Sindarin tongue in all their daily uses, and the High Speech of the West was spoke only by the lords of the Noldor among themselves. Yet that speech lived on ever as a language of lore...
- The Silmarillion, Quenta Silmarillion, XV - Of the Noldor in Beleriand

Istari Nalmë, "we are scholars", refers to the Scholar profession in LotRO:

[Scholars] can create scrolls for other craftsmen to read and improve their chances of producing a superior product. [...] Other practical applications include lore by which specific enemies might be best combated, dyes, and cures for various maladies.

which is of the Historian vocation:

Historians are unique in their access to the Scholarly arts, allowing them to research ancient lore and use their discoveries to the advantage of their fellows. In addition, a Historian has the more practical talents of cultivating land and forging the blades that are so often spoken of in the histories they study.

This is essentially the aim of Istari Nalmë: for scholars to cooperate with one another and so provide assistance to all Free Peoples of Middle-earth, regardless of race or class. And while scholars are generally regarded to be students of lore and loremasters, throughout the professions there are students of woodcraft, and of weapon- or metal-smithing; there are also those who study the art of jewelry-making, music and the culinary arts, and more besides. Thus, by intentionally avoiding the term 'loremaster' in favour of 'scholar', the wise founders of Istari Nalmë also avoided any class distinction, for anyone can be a scholar and historian, and everyone is a student of one or more vocations (while in-game Lore-masters are restricted to Elves, High Elves and Men.)

Istari Nalmë is chartered as an elven kin, but for the simple reason that it began in the elven havens of Lindon, and was initiated by elven scholars; but obviously a scholar may also be of the Echil, Hadhodrim, Periannath or even Beornings.

When I first began to research my character for the Laurelin Archives I found vast tracts of lore hitherto undiscovered by myself, and so the chronicles of his journey of knowledge through Middle-earth became my attempt to share what I learned with the Free Peoples of the L.A. This is an extension of that attempt.

There is but one 'rule' of Istari Nalmë: 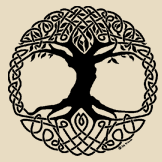 The Tree of Knowledge, emblem of Istari Nalmë