Submitted by Delioron on December 31st, 2021 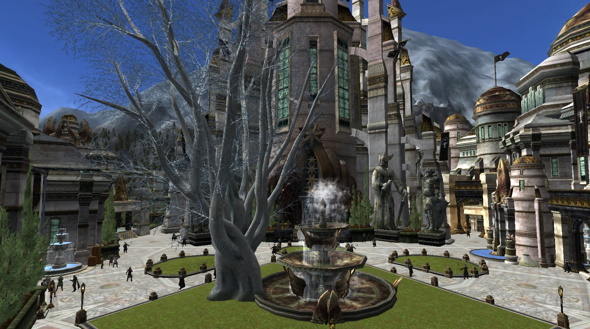 There was no visible sign of emotion on Steward Denethor’s face when Parthadan told him the news. He picked up the White Wand with a golden knob that had been leaning against the black chair and slowly rotated it in his right hand, screwing the golden knob with his left hand fingers.

Parthadan said nothing. He did not look at Denethor directly. He kept his eyes fixed on the throne upon the dais behind Denethor, studying the majestic chair, the glorious swan wings spreading behind the throne and the imposing White Tree of Gondor rising high above it. He felt old. He had been feeling old and tired since the day Denethor had given him the order to summon Delioron to Minas Tirith from his home in the Cape of Belfalas where he had spent the winter. The Steward had news for Delioron. Denethor had decided to offer the man a position as a King’s Writer – a royal scribe of Gondor. Something suitable for his talents, something discreet – something that would bind him in Minas Tirith so he could be kept in a tight leash and out of the harm’s way. In the past few years Delioron’s name had popped up too many times in too many disturbing scenarios to overlook it anymore. In Denethor’s eyes Delioron was a menace and a dangerous troublemaker who needed to be put on a leash if there was no other way of getting rid of him.

”Well, that was unexpected”, Denethor said with a straight face. ”Did he send a messenger from Belfalas?”

”No, he came to see me personally, my Lord. One last time, he said. If Gondor has no need for his services anymore, he considers himself free of any obligations for the realm and wishes to retire to a quiet life in his home in the Cape of Belfalas.”

”What arrogance!” Denethor sneered. ”Of course Gondor would have need for his services! Didn’t I just offer him a position as the King’s Writer? There are many who would give up their right hand for an opportunity like that. But if he wishes to retire instead, it is his prerogative. As long as he retires quietly. Do you understand, Parthadan? Delioron’s spying days are over. I don’t want you to have anything to do with him ever again. I know that he has had many dangerous missions, and I admit, there has been some unfortunate circumstances when his unorthodox methods have been somewhat justified, even necessary at times. And I am grateful for the discretion he has shown when discretion has been called for. But we can’t allow someone like him to represent the interests of Gondor anymore. Gondor is supposed to be the fount of civilization, and that man is a killer and a law-breaker, not much above a common criminal. We can’t have his kind to serve the realm anymore. It's not honorable!”

Parthadan felt sick in his stomach. He had never been friends with Delioron, they had never even liked each other very much, but in some strange way Parthadan felt like he would miss Delioron. Delioron had been useful. He had been good at his work. Perhaps his methods had been high-handed and unorthodox at times, but at least Delioron had produced results. And now Parthadan would have to make do without him.

”Any news about our Imladris adventure?” Denethor asked, shaking Parthadan out of his reverie.

”I sent Gwathrandir there”, Parthadan replied. ”He should have reached it a month or two ago at least, but no news yet. These things take time, my Lord. I will hear news from him eventually, either when he returns or when Cugusaelon sends a word.”

It was already mid-March and the green fields of Pelennor were blooming with golden, bell-shaped alfirin and mallos, small white simbelmynë and long-leaved, sweet-smelling athelas. Damp southern breezes from Lossarnach caressed the White City, making life in the service of the realm suddenly feel unimportant.

”The seeing-stone”, Denethor changed the subject. ”It’s acting up again.”

”I was looking into the stone again, maybe a week ago. I don’t recall what exactly I was trying to see this time, but it showed me the same three white towers on the hills again. Then the vision changed, it moved like I was looking through the eyes of a bird flying through the air, inconceivably fast. When it stopped, I saw two men standing on a cliff over a river. The men wore rustic green and brown hooded cloaks and silver brooches shaped like pointed stars. Which would make them Dúnedain, if I’m not mistaken? They were carrying something between them that looked like a rotting body of a man, and tossed it over the cliff into the river. And then I heard that same voice that was not really a voice in my head again, whispering just one word: Reed. What do you make of it, Parthadan?”

Parthadan rubbed his chin. ”Dúnedain, my Lord, I agree. If the three towers you saw are indeed the Emyn Beraid, then the closest big river is the Lhûn. But it’s a long river that spans through northwestern Eriador between Mithlond and the Blue Mountains. It’s mostly uninhabited wilderness.”

”I see. And what about Reed? Does that mean anything to you?”

”Not a thing”, Parthadan said. ”It doesn’t sound like a Sindarin word either. Unless you misheard, my Lord? It could be Rîdh, a sown field.”

”And what would Rîdh mean to you?”

”I beg your pardon, my Lord, but nothing. Nothing whatsoever.”

Denethor closed his eyes for a moment. When he opened them again, he focused their piercing gaze upon the short and stocky man with a long gray hair standing in front of him.

”Tell me, Parthadan”, the Steward said. ”You don’t happen to have someone in the old city of Tharbad as well, do you?”

Parthadan blinked his eyes, looking surprised. ”Why, yes, my Lord. Yes I do.”

”When the sight of those two cloaked and hooded men tossing a rotting corpse off a cliff blurred, the vision in the seeing-stone changed again. This time I saw ruins of a once great city built on either side of a great river. Soon I recognized the ruins. It was Tharbad, that once significant outpost we abandoned a thousand years ago. It’s all in ruins now, just dust and rubble and nothing else. Or so I had thought. But when the vision closed in on the ruins I saw a figure of a solitary man, a disheveled man in a ragged cloak and a long, gray, unkempt beard. There were dovecotes in the city center by the bridge, Parthadan, and the man was feeding the pigeons in those dovecotes. Pigeons and dovecotes reminded me of that incident a year and a half ago in Bree. I’m sure you remember the incident I’m talking about, Parthadan, don’t you?”

”Of course, my Lord. It is regrettable what happened with Greengage in Bree, but pigeons are still very fast and efficient way of communicating over long distances. Greengage was not the only pigeon-handler we had, and one rotten egg doesn’t mean the whole system doesn’t work. Faragadir is a woodsman and a hermit, my Lord, he’s very good with animals. He’s been living alone in the ruins of Tharbad for a decade and a half. He likes it there because there are no other people to bother him there. He scouts the surroundings of the city and keeps an eye on the bridge. There’s not much traffic these days, but he sends me reports whenever he sees someone crossing the bridge, or when he spots orcs or anything out of the ordinary near Tharbad. It is very convenient to have eyes and ears in that region of the world as well, my Lord. Faragadir hunts and scavenges his own food, he has no contact with other people and no desire for it either. The situation is completely different from Bree, my Lord.”

”Why did I see your hermit in the seeing-stone, then? And who is sending me these visions?”

”I have no idea, my Lord. But if you saw Faragadir in the palantír, it must mean that the other visions are probably true as well. This whole thing reeks of a conspiracy. Is Sauron planning an invasion to Imladris? Is he planning to attack Lórien? And if he is, who is trying to warn you of it through the palantír?”

”Maybe it is Sauron himself.”

”But why would Sauron want us to be on our guard if he wants to attack against the Eldar?”

Parthadan considered the question for a moment. ”Perhaps we cannot trust the visions in the palantír”, he said after a pause. ”Perhaps we should send a warning to Imladris somehow.”

”A warning? How? Do you have even more elves on your beck and call? Or would you risk sending a Gondorian to Lórien? You know what they say, Parthadan. Of all the men who travel to Lórien, rarely anyone returns. And those few who do are… forever changed.”

”I had a thought”, Parthadan said, rubbing his chin. ”About Delioron.”

”Yes, my Lord. You see, Delioron knows Gwathrandir. I mean they have met before. Twelve or thirteen years ago, before I employed Delioron. When we all thought he was dead, while in reality Delioron was fighting with the rebels of Kravod against Sauron’s puppet king in Narimanush, Hûz III. As you might remember, my Lord, my predecessor had sent Delioron to Kravod on a diplomatic mission to offer Gondor’s aid and support to King Seddîd, who was opposing Sauron in that region of Rhûn at the time. It all went sour when Sauron’s supporters overthrew and killed Seddîd and his followers, and for years we thought Delioron had died during the coup as well. Until he came back.”

Denethor leaned back on his chair and frowned. ”And what does this lesson of ancient history have to do with anything current?”

”Gwathrandir, my Lord. He once told me that he roamed over Narimanush at the time and aided the rebels in the mountains for a while. He had been surprised to meet a young Gondorian diplomat among the rebels. I asked about it from Delioron later, and he confirmed Gwathrandir’s story. They had known each other in Rhûn.”

”Look, Parthadan”, Denethor said, lifting a finger in a warning gesture. ”I don’t want to hear you talking about this Delioron character anymore. Delioron has retired, and good riddance to him! May he find joy in his days of retirement. Didn’t I make myself clear enough earlier? Delioron is gone, and I want him to stay gone, so any connection with him and Gwathrandir or anyone else in your service is moot. Do you understand? Do not mention that name in my presence ever again!”