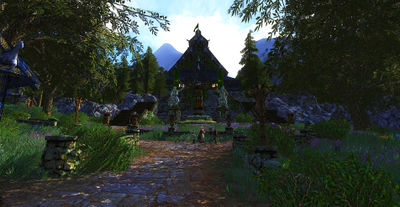 Thus Eorl became the first King of the Mark, and he chose for his dwelling a green hill before the feet of the White Mountains that were the south-wall of his land.

—J.R.R. Tolkien, The Lord of the Rings, Appendix A: Annals of the Kings and Rulers, II: The House of Eorl

Aldburg was the ancient seat of Eorl, the first King of the Mark, passed on after the completion of Meduseld to the descendants of his third son, Eofor. Now it is ruled by Éomer son of Éomund, Third Marshal of the Mark, the King's nephew and a skilled rider, taking the place of his father before him. As it was in centuries past, it is still the mustering site of the Muster of the East-mark—though that horn has yet to be blown—as well as the center of life in the Eastfold, despite growing concerns over its age and overgrowth. 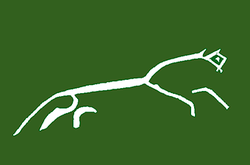 There, the Rohirrim lived afterwards as free men under their own kings and laws, but in perpetual alliance with Gondor.

—J.R.R. Tolkien, The Lord of the Rings, Appendix A: Annals of the Kings and Rulers, II: The House of Eorl

War has not yet come to Aldburg. It is five years prior to the War of the Ring, and the concerns of the settlement Eorl founded five-hundred years ago remains largely unchanged. The green hill he chose at the feet of the White Mountains is no longer the capital, yet it remains an important city whose locals are still its locals. Men all across the Eastfold come to sell their goods, the occasional caravan of Gondorrim merchants bringing more exotic fare. Scops sing in the taverns, smiths shape cold iron. Young men attempt to woo young women, old men bent double by fire-pits gamble with dice, Drunkards still drown in their cups and the Lord of Aldburg still settles the same disputes his predecessors did centuries prior, old wounds still sore in the wake of new bloodshed.

An old blood-feud has reemerged in the former capital, threatening to swallow the sons and daughters of its original instigators in a sea of violence, because a duel over of the worthy successor to the late leader of to the frithgild, a militia called upon in times of need. With new blood spilled, forgotten hate boils to the surface, the future of two of Aldburg's oldest, most highly-honoured families hanging in the balance, their chain of revenge and calling upon diverse allies threatening to turn the venerable burgh into a bloodbath.

Feel free to ask for more about our personal interpretation of Rohan, either through the Laurelin Archives, through an in-game mail, or a tell to one of our officers!