Among the pines of Trollshaws 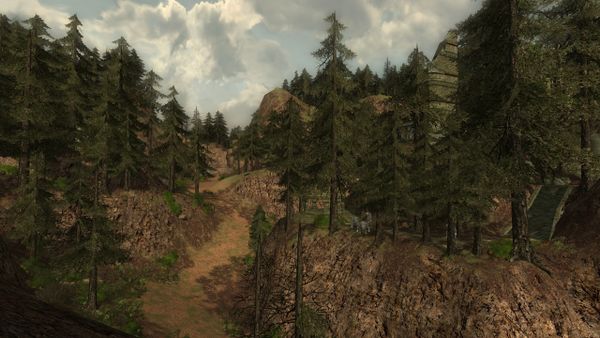 Three riders, all on mounts, rode at a steady pace up the long and winding road beetwen the rocks... and the mist. The horizon was blocked by high hills and steep, impassable cliffs, shadowed by deep gorges and dead-end ravines. One of the riders, a hobbit woman, appeared to be leading the group. She was young, with light brown hair tied into two short, messy braids on either side of her head, and big azure eyes. There were spear and javelin strapped at her side.

Behind her rode a female elf. She had long, golden hair that went to about her waist, and icy blue, though not unkind, eyes. She wore a white-silver velvet cloak with matching tunic, and thigh-high boots that laced all the way up. On her back was a bow and a case of sharp to the very point arrows, and at her side was a lethal looking dagger, that she frequently glanced at, as though to make sure it was still there.

A short, dwarven man on a pony followed the women. He had a light brown beard and hair, with equally brown eyes. He was adorned in bright, colorful robes, with a golden belt upon his waist, rather intimidating looking. He carefully guarded the wagon accompanying them.

The halfling and the elf looked around carefully. The Trollshaws was haunted by Trolls, especially after the fall of Arnor. Stone-trolls from the mountains came to the woodlands. Linglorel stopped her mount, Passerose too. The elf stringing her bow and nocking an arrow. Up the slot she looked, as well as behind and down, scanning the walls above as she searched. "I see nothing," she whispered.

Passerose, her javelin in hand, remained silent. The dwarf looked worriedly at the cart. „I bet he'd sooner die here than leave the cart with his fortune” thought the elf, and allowed herself a small sigh. They made up a rather unusual group. They met in Rivendell by coincidence... or it was fate? That Linglorel did not know. And she still wondered why she had agreed to accompany this avid dwarf in his quest. The hobbit turned out to be a noble spirit, very brave, which was surprising knowing the peaceful nature of her race. But him... Sometimes the elf could see an eager, greedy, restless motion in his eyes, which showed the passion that had taken root. How long will it take for this dark tree to grow out of this? So why did she agree? For adventure? For a view of distant lands? Partly, but she knew it wasn't the main reason. „I believe there is still light in him. Perhaps... is our lot, as the Elder Race, to subtly guide others away from vanity and greed and dominance, away from those empty and deadly and barren places”. Someone who can play at harp so beautifully cannot be completely corrupted. Many more days will pass before they reach Thorin's Gate. Perhaps then he...

They came to the crest and started down, still trapped between crevice-raddled vertical walls. And grey vapor of mist swirled about. Now the horse and ponies began to skit and shy, as if they, too, sensed an unseen menace. And a faint stench came through the dampening mist. A pony squealed, and from behind there came a loud scrape. Frimsi whirled his mount 'round in time to see a monstrous form.

"Troll!" shouted dwarf, as something spun upward through the mist to strike the huge monster in the eye.

Troll roared in agony, clutching at its pierced eye and trying to pluck the elf arrow out. Yowling and thrashing, it lurched between Linglorel and Passerose.

The hobbit knew that Linglorel's daggers, keen as they were, would not cut through the creature's hide, and without a second thought, the halfling leapt from her pony and moved in below the towering monster and took a fixed aim. Then something Tookish woke up inside her. And as the Troll bellowed in agony, Passerose threw an javeline upward, to flash into the brute's gaping, yowling maw, punching through the soft inner flesh and driving up into the troll's brain.

The creature howled, and then toppled backward to land with a thunderous crash, the nearly invincible monster dead, slain by nothing but a javeline and a steel-tipped wooden arrow.