Born in the First Age, she was raised in the House of the Fountain in Gondolin. Before the fall of the city, she grew up under the strict tutelage of her father, preened to do as society expected of her.

After the Fall of Gondolin, she lost both of her parents and ended up journeying to Lindon alone. From there she eventually made her way to Eregion, where she became a scribe at the great libraries.

Using all of the anger she held towards her family for leaving her, and the servants of the enemy for destroying her home, she learned the art of swordsmanship. She excelled in her training as well as her position as a scribe.

After the sacking of Eregion, she followed the Lady Galdriel to Lothlorien, where she was awarded for her loyalty and skill and was appointed the position of a messenger between realms.

For millenia she has spent her time traveling between the elven realms, or otherwise, bringing messages of importance between the lands. She can be found primarily in the realms of Lothlorien, Imladris, or Lindon." /> 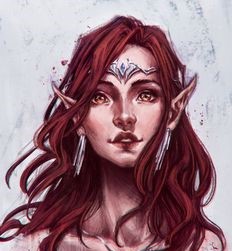 |The author really appreciates RP with anyone who is interested. Anyone who would like to meet up ICly, please send a message here or in game!|

This gallery is empty.
Linnuiel's Gallery