Eärcalië hails from Forlindon. She descends from a line of kindred serving in the House of Fingolfin in the Elder Days.

The ancestors of her mother did settle in Nevrast, whence - shortly after the construction of Vinyamar - Mehtarnis was born. She would, however, not acquaint her spouse until later. Indeed, the line of her future husband did opt to wander wide and far in that region, abiding for years to pass when they finally settled into Gondolin.

After the destruction of Gondolin, in the twilight of the First Age of Arda, as Eärendil fared unto the mouths of the Sirion, fate held the two families sundered. Hosted with her kin by the new High King, Metharnis however could not come across her spouse yet: Aicasicil – a survivor of the Hidden City, once a soldier of the House of the Heavenly Arch – was in fact soon persuaded by his family to  leave Ossiriand and follow some of the Noldor in Eregion to assist in the creation of Ost-in-Edhil. Such was the only other settlement of reunion for the Noldor, and the scion of Gondolin prospered there, till its destruction by Sauron the Deceiver. It was then after the sacking of Eregion and the demise of the Mirdain that he fared to the newly formed refuge of Imladris, his heart aching much to reunite with most Noldor who decided not to fare in the behest of the Powers of the World; he therefore reconciled with Gil-Galad. After having served in the Host of the Eldar on the ashen slopes of Orodruin, he came back in Imladris, grateful for victory yet sorrowful for the fall on his liege. His only wish now was beseeching for tranquility and rest. Metharnis, who fared in Lindon when Beleriand sunk, traveled to Imladris to mourn the fallen High King and behold at what would could come to pass hence. Her eyes noticed Aicasicil during a night blessed by a full turn of the Wayward, and her chaste sigh acknowledging both his greatness and his fatigue. Their love prospered, and their union, coming forth after some seasons, happened in Lindon, where Aicascil wished to return for the Vale weighed too much in memory upon his heart.

They finally settled in Forlindon, leaving such sorrow beneath them. In Ered Lindon they retired in their estate near the coast, where in a time of calm and peace, their daughter was born. They decided to name her in the old tongue, in honour of their ancestry. 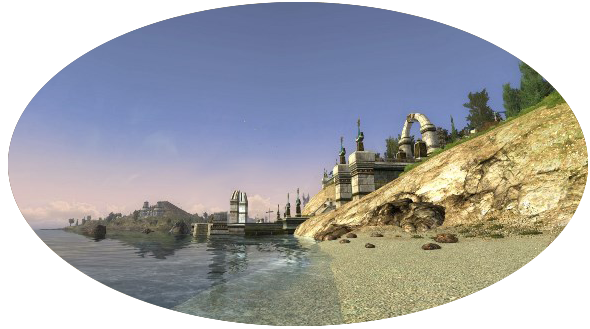 Eärcalië like her parents follows the tenet of the Noldor of Gondolin and has adopted their ways as her own.

She grew up listening to her parent's tales of days gone by, she is a dreamer and sometimes naive elleth, who likes to imagine herself inside the tales she loves.