"Queer things you do hear these days, to be sure,” a young gardener was overheard in the Green Dragon one evening, muttering rumors the likes of fairytales to his friends and neighbors. “What about these Tree-men? They do say that one bigger than a tree was seen up away beyond the North Moors not long back.”

“Who’s they?” the miller’s son asked as the other Shirefolk leaned in to listen.

“My cousin Hal for one,” the gardener went on. “He works for Mr. Boffin at Overhill and goes up to the Northfarthing for the hunting. He saw one.”

“But this one was as big as an elm tree, and walking—walking seven yards to a stride, if it was an inch. Walking, I tell you; and there ain’t no elm tree on the North Moors…” 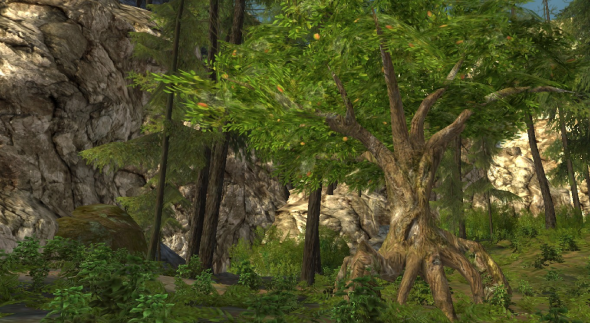 A glimpse of the mysterious Walking Tree.

Walking trees...some might say the old gaffer’s son was simple, or else cracked, going on about something so fantastical at the tavern that night. Cousin Halfast has always been known for his wild stories of this or that, brought down from his ventures near Oatbarton, and poor Sam might just be kind-hearted enough to pay him attention. Walking trees, though? No one else in Bywater would believe it.

No one in Bywater, that is, but Overhill is near enough the Bindbole Wood that there have been similar sightings by its townsfolk. Those brave enough to range far enough through the spider webs into Lob’s Grove have reported what appears to be an apple tree, big as an elm, so far from the Appledores that it might have simply picked up and wandered off. Of course, there are many explanations for why an apple tree would find itself so deep in the fir-clad hills north of the Hill, most of them sensible, and Hobbits do love good sense.

There is another answer, much less sensible, though the Shirefolk would not think of it. After all, the songs that Elves and Men have sung from Mirkwood to Gondor have not crossed over the Mountains to reach the Shire, and so Hobbits have never heard of Entwives.

In ages past, the woods were wide and wild. It is said a squirrel could go from Dunland to the Shire without setting a paw on the ground, so thick were the trees. Ents and Entwives roamed the Forest that was Eriador, tending the trees and other growing things. They protected the forests from dwarves, orcs, and others that would mean them harm. They were young, friends of the Elves and of the earth.

They lived together for an age, but over time the Entwives turned their desires not to shepherding the wild, roaming trees of the great wood, but to the lesser trees, to fruits and other crops, and to tilling gardens from the earth.

The Entwives therefore traveled East across the Great River, and they planted a garden filled with corn. They taught Men their craft, and their land flourished with fair crops. But Evil does not care for the earth, and when Sauron grew in power he destroyed the gardens of the Entwives. The once fertile soil became a desolate landscape, called the Brown Lands ever after, and the Entwives were never heard from again.

Elves have crafted songs of the Ents’ long searching, their loss and bereavement, and some of those songs have passed into the tongues of Men, though the Ents themselves sing only their beautiful names as they remember them. The tree shepherds ranged long and far across Middle Earth in search of them, but now their beards are grey, and the woods are lessened, and the Entwives are only a memory. 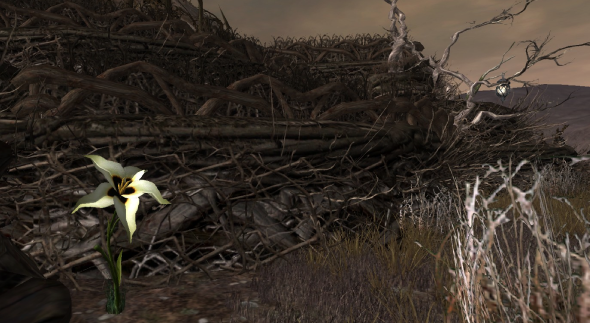 Some say these solitary flowers are all that remain of the Entwives in Middle Earth.

They left their footprints, though, in the places where they long ago dwelt. In the Old Forest in Bree-land, an unusual breed of flower grows between the woven roots and branches of ancient trees. There are eight, one for each Entwife, as the tale goes, who disappeared into the forest in bygone days. A fanciful tale, much like the walking-tree of the Northfarthing, no doubt, except that a flower of a similar, if not the same breed grows miles away, far East over the Great River, in the lands the Entwives once gardened. It is said an Ent, Gnarlstump, still seeks them there, and like the Ents of old will ask passersby for their help in finding any trace of Entwives, no matter where they’ve gone.

The Desolation of the Gardens, though, are far from the Shire, and an apple tree in those parts is no strange sight. What self-respecting hobbit would listen to two notes of something so outlandish, when it’s clear that all Hal Gamgee saw in those woods was an elm?

For those who believe in a Walking-Tree, however, it might be worth ranging a little farther than the firelit corner of Bywater’s Green Dragon. Venture a little further North, and you might find an Ent himself, Longbough, sheltering in the Eavespires on the Western edge of Lake Evendim. He may, after so long searching, wish to hear of what appears to be an apple tree, big as an elm, walking the border as if wishing to tend the fertile farmland of the Shire. After all, as Gardener Gamgee said, there are no elm trees on the North Moors. 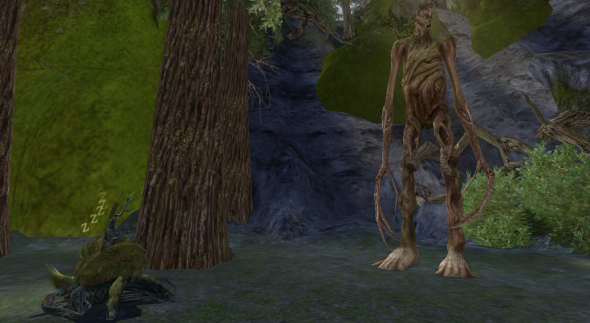 A peculiar creature...or is it a tree...on the shores of Lake Evendim.

Is there a legend you’d like to learn more about? A curious location in the landscape you’d like explained? Send Haeneth a message to contribute to future articles.