The Hobbitry-in-Arms is the scarcely ever used and hurriedly-assembled militia of the Shire. Thain Paladin Took II is its captain. He has the authority to muster a Hobbitry in times of emergency, but it is long since there has been any need of one; the rangers have quietly and thanklessly sheltered the Shire from dangers beyond the bounds, and Hobbit government is largely ceremonial, if it exists at all! Thus, the Hobbitry has become a mere relic of tougher times. Any weapons from such times gather dust on the walls of the Mathom-house.

Now that the rangers have moved off and there is talk of brigands and worse abroad, it might soon be that a Shire-muster needs calling.

This is a militia in the barest sense of the word, not taking itself too seriously; Shire-moots are usually more about facilitating gossip, companionship and good cheer than serious war effort. But in cases of great emergencies, the Hobbits step up—with pitchforks, shovels, rolling pins, saucepans and whatever else they can hastily lay their hands on. 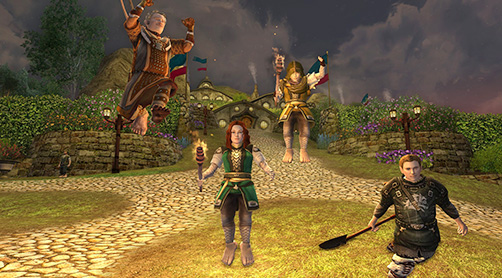 Our kinship burrow is located at Sootcrest in the Shire Homesteads.

Recruitment
We are a relaxed roleplaying and adventuring Hobbit-only kinship.

Are you worthy of wielding a shovel, rolling pin, saucepan, or whatever yer have to hand? Enjoy fine company, a full belly and good gossip? Visit our website http://thehobbitry.com to apply.