“I'm terribly worried about her…” The hobbit muttered as he huddled near the fire under the eaves of the Old Forest. “You see, she’d been going on about ‘The Last Prince,’ one of Mr. Butterbur’s tales. It’s one of his better ones...but I’d say the tale isn’t quite the truth of it.”

Bob had reason to doubt the old barman. His daughter, Lalia, had been told by the tavern-keep that the Last Prince’s barrow lay somewhere between the Northern Barrow and the Dead Spire, by a large stone. The Barrow-downs are littered with large stones, though, pointing upwards like jagged teeth out of green gums, and soon both Lalia and her father, who went after her, lost themselves in the hills.

Thanks to a passing adventurer, Lalia was found and returned to her father, but not all hobbits are so lucky. A tavern-goer at the Prancing Pony, one chilly September evening, overheard a handful of them muttering to themselves about a story he could not quite believe.

They had been traveling through the Barrow-downs from the Old Forest, for reasons that were quite unclear, when beset by fog they lost each other and their way. The tavern-goer overheard one of them, a Mr. Underhill, if he remembered correctly, recount his version of events. The night had come quickly, the mist flowing in shreds and tatters. It had been very cold, and the wind began to hiss over the grass. He had hurried to try and find his companions, but came upon a dark black shape—a great barrow. He cried for his fellows, and then a voice, deep and cold, shouted: “Here! I am waiting for you.” It seemed to come out of the ground. 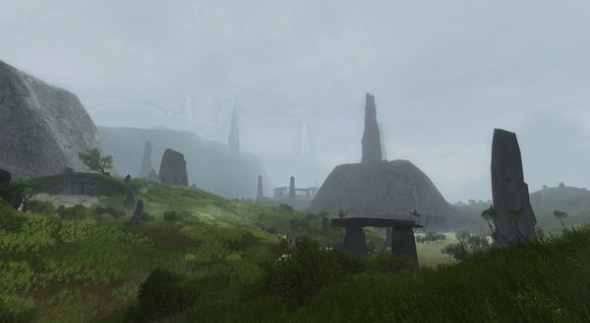 The tombs were revered by the Arnorians, who buried their Kings amongst their ancient ancestors.

The hobbit could not run, and his knees gave way. A tall dark figure like a shadow against the stars appeared, and leaned over him, and with a grip stronger and colder than iron seized him. Then all was black.

When he came to, he was in a barrow. A barrow-wight had taken him and his companions, dressed them in white rags, adorned them with gold chains, circlets, and rings, and lay swords at their sides. He could hear around him a dreadful song:

Cold be hand and heart and bone,
And cold be sleep under stone;
Never more to wake on stony bed,
Never, til the Sun fails and the Moon is dead...

As the poor hobbit listened, he watched in horror as around the corner of the tomb, a severed arm was groping its way towards them. He froze in doubt and fear for a moment, but courage lies in every hobbit, however deep, and at last he grabbed a sword beside him and hacked at the arm. The hand broke off, the sword splintered, there was a shriek, and the light vanished. In the dark there was a snarling noise.

He could do nothing else but sing. He remembered a song that was taught him by the Master of the Old Forest, and sang out into the darkness.

He was alone with his singing until his prayer was answered. There was a loud rumbling sound, as of stones rolling and falling, and suddenly light streamed in, real light, the plain light of day. A low door-like opening appeared at the end of the chamber, and there appeared the old man, Tom Bombadil.

The tavern goer couldn’t know that the hobbit telling the tale was not a Mr. Underhill at all, but Frodo Baggins of Bag End. What none of them knew, however, was that the barrow in which they were imprisoned belonged to Cardolan’s Last Prince.

Perhaps it was for the best that Lalia did not find her Last Prince, after all... 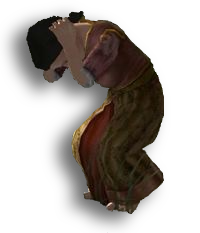 But who is the Last Prince? Who built the Barrow-downs and why? And why does any of it matter?

The oldest barrows date back to those days, to the First Age, before Númenor existed. There is ancient, and great, power there.

The great kingdom of Arnor once spread across all of Eriador, but two thousand years before the War of the Ring, the King of Arnor died, and his sons separated his kingdom between them. Bree-land, including the Barrow-downs, became part of the Kingdom of Cardolan, the most Southern of the three.

What followed were four hundred years of strife between them. The Dúnedain were lessened, and eventually the line of Elendil would pass out of Cardolan altogether. It was not in true danger, however, until the Witch-king came into the north and founded Angmar with the intention to destroy the remnants of Arnor forever.

Rhudaur fell, but Cardolan resisted for one hundred years, until a great host marched from Angmar and laid siege to Weathertop. The Watchtower was destroyed, Cardolan was ravaged, and its people retreated into their fortress at Ost Gorthad. It was in this desolation that the Last Prince of Cardolan met his end, and he was the last of the royal line to be entombed in the Barrows, laid to rest with treasures fit for the King he would never live to be.

It is curious, then, that a hobbit—one of Mr. Underhill’s friends...Merry, the tavern-goer thought he was called—woke up from being entombed shouting: “The men of Carn Dûm came on us at night, and we were worsted. Ah! The spear in my heart! No! No!” The hobbit woke from his dream to find himself, himself again, but it begs the question...if he was imprisoned in the cairn of the Last Prince of Cardolan, was it a royal death that he remembered? Did the Last Prince meet his end from a spear to his heart?

The men of Carn Dûm came on us...and we were worsted. 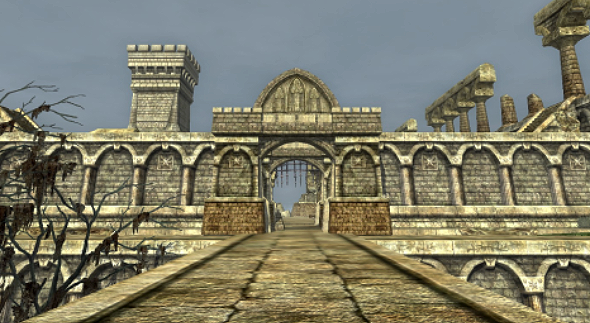 Ost Gorthad, the last stronghold of Cardolan, was cursed by the Witch-king and has been haunted since.

After the passing of the Prince, the Dúnedain of Cardolan tried to rebuild, but the Witch-king sent a plague throughout Middle Earth, and the people of Cardolan fled or perished. It is from this time a Journal was written, called by scholars the Lore of the Cardolan Prince, of which many pages are missing, that tells of the plague and the coming of the wights, which were raised by the Witch-king to keep people from settling in the region ever after. The Men of Bree have been said to offer rewards for these pages, recovered from the Barrows, as well as any Barrow-treasures or Cardolan-trinkets an adventurer may find.

A dream was not the only thing that the hobbit Merry took with him from the cairn. Their friend, Tom Bombadil, had recovered precious heirlooms from the hoard, and out of them chose for each hobbit a dagger—long, leaf-shaped, and keen, damasked with serpent-forms in red and gold. “Old knives are long enough as swords for hobbit-people,” he told them. “They were forged by the Men of Westernesse...the Dúnedain. They were foes of the Dark Lord, but were overcome by the evil king of Carn Dûm in the Land of Angmar.”

That weapon was precious to Merry, and he took it with him on the longest voyage, from Eriador south, through an epic tale that is beyond the scope of this scop to tell. Many orc limbs met their ends to its blade, but its true fate is greater still.

In the greatest battle of the Age, that dagger struck the Witch-king, by Merry’s hand, shearing through his black mantle to pierce him behind his knee. The shield-maiden Éowyn then struck the wraith between crown and mantle, and a cry went up into the shuddering air, and faded into a shrill wailing, and was swallowed up, and was never heard again.

The Witch-king, the enemy of Arnor and all its descendents, was no more.

In the aftermath, Merry looked for his sword from the Last Prince’s barrow. There it lay, but the blade was smoking like a dry branch that has been thrust in a fire; and as he watched it, it writhed and withered and was consumed.

It is written in old Baggins’ red book:

So passed the sword of the Barrow-downs, work of Westernesse. But glad would he have been to know its fate who wrought it slowly long ago in the North-kingdom when the Dúnedain were young, and chief among their foes was the dread realm of Angmar and its sorcerer king. No other blade, not though mightier hands had wielded it, would have dealt that foe a wound so bitter, cleaving the undead flesh, breaking the spell that knit his unseen sinews to his will.

I have not sat with Mr. Butterbur to hear the tale he tells of the Last Prince, nor asked the lass Lalia what of the story enticed her to go looking for the dead man’s tomb. I know, though, that whether the hobbits finding his treasures, being gifted his blades, and being beset by his dreams is chance, if chance you call it, or something else...the Last Prince of Cardolan might find rest, at last, knowing that the enemy that sought, and succeeded in, his people’s destruction, is gone from this world, forever.

Want to experience the legend for yourself?
Laila—Bree-land [31.1S, 55.6W]
Ost Gorthad—Bree-land [35.5S, 53.9W]
The Lore of the Cardolan Prince’s six pages drop randomly from barrow-wights in the North and South Barrow-downs
The entrance of the Nazgul into the Barrow-downs, from the Andrath, where the Witch-king stayed a few days to rouse the wights. [34.9S, 53.1W]

Is there a legend you’d like to learn more about? A curious location in the landscape you’d like explained? Send Haeneth a message to contribute to future articles.