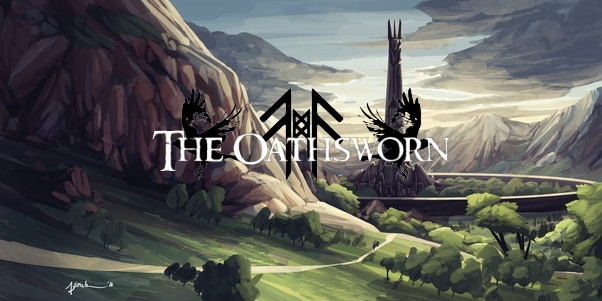 The Oathsworn command the garrison at Fréasburg, one of Rohan's dozen hillforts that stretch, ever watchful, along the Isen. Though they obey the peace of the Mark and keep treaty with Dunland, they are not sworn to king, crown, or chieftain—but to each other. They fight for friendship, glory, gold, and wyrd. One day, their paths may lead to beds or bloody graves, but now they stand strong with shields at kinsmen's shoulders, or sit with them on mead-benches, voices mixed in song.

Bright were the buildings, halls where springs ran, high, horngabled, much throng-noise; these many mead-halls men filled with loud cheerfulness: Wyrd changed that. - The Ruin

These are no hangers-on in heroes’ armour. These few who’ve survived their weathered lives have earned their place in the shield wall. They have seen the burnings of halls and fields, the scattering of kinsmen, and a hundred bloody battles from Forochel to the Firien Wood.

The Oathsworn were once a warband over half a hundred strong. They are now a handful, but as desperately loyal as ever. Over the years, they’ve earned word-fame, treasure, and friendship, but they dwindle now, as darkness creeps back into the world. The more strongly they hold on.

They fight now at the Isen, where the King has declared those who join its aid have the chance to earn back what they’ve lost: titles, land, their good names—all but the people they’ve buried. Their fealty is not to the King, however, but to songs that will be sung of them in years to come, to the promise and pursuit of peace, and, above all, to each other.